In the bottle: I already love this. It’s that same sweet pumpkin note that other Arcana pumpkin scents have, but it’s much darker and more resin-y thanks to the Holy Terror. I like the smokiness that I’m getting.

On the skin: This doesn’t change much on the skin. It’s exactly what the description says: Pumpkins and Holy Terror. It’s not overly sweet at all, if that’s a concern. It’s spicy and warm and awesome. It’s like the distilled essence of Halloween in a bottle.

Based on notes alone, this is definitely my kind of scent. I love a good spooky blend! I also just watched the film Angels and Demons, so the Vatican Archives have been on my mind. The only worrying note is the cedarwood, since I tend to amp that.

In the bottle: This is dark. I’m getting a very strong musk blend that almost reminds me out oudh, with a hint of church incense and figs. It’s ancient and scholarly; I can really smell that kind of “old tome” smell from the parchment musk.

On the skin: Whoa. Brace yourselves, because this is a strong scent. Lots of throw here. I’m really surprised on how this smells on me, honestly. I was expecting something in a similar vein to sixteen92 Liber Officiorum Spirituum, but it’s not like that at all. It’s very heady, with a fruity incense kind of vibe. I feel like that’s due to the combo of the figs, honey, and church incense. I don’t get any cedarwood, which I don’t mind. Of the musks, the red musk is most prominent. I don’t get much in the way of parchment on me. I could swear that there is oudh in it, because I keep smelling it. This is a dirty, mysterious smelling scent. I was hoping for something more book-heavy, and this is a bit too incense-y for me, despite the fact that I like church incense. I feel like I might like this on someone else who amps the parchment instead of the incense combo. I’m quite surprised! I thought for sure that this was going to be the big winner for me from this collection.

When I told some of my friends in the indie community that I hadn’t tried this scent yet, they were shocked, because this scent is very much up my alley. I love church incense scents, and I love vanilla, so it seemed like a match made in heaven. That being said, while this scent is beloved by many, there is also a large contingent who think that this smells like a cheap vanilla candle. What would it be for me though?

In the bottle: Acrid and plastic-y. Sometimes vanillas can do that, and it doesn’t bode well.

On the skin: Well, it no longer smells like burning plastic. However, what I’m basically getting now is just regular old Holy Terror with the smallest hint of vanilla sweetness. Honestly, if you had me blind sniff this and regular Holy Terror, I might not be able to tell the difference. And that means that this is going into the destash bin.

TL;DR: Holy Terror with the tiniest bit of vanilla. Boring and disappointing. 2/5.

I like smoky scents. I like Holy Terror. I’m a fan of peach notes, especially Arcana.  Therefore, it was a no brainer when it came to trying this scent.

In the bottle: Smoky peaches. There’s nothing sweet about it; its really like a bunch of fresh peaches sitting in a fireplace. It’s quite interesting.

On the skin: I…don’t know what’s going on here. The tea and smoke combo reminds me a lot of the tea and smoke combo from Marshmallows Smoke, but for some reason, this scent is turning sour on me.  It almost smells sweaty? There’s also the hot toddy that adds this warmth and depth, but I can’t get past that weird BO smell. I don’t know what’s causing it, but I’m not a fan. 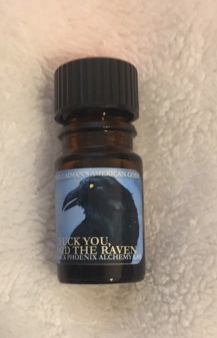 BPAL Fuck You, Said the Raven

As I have mentioned, I love Neil Gaiman; he’s one of my favorite authors. Recently, his name has been in the news because of the television adaptation of one of his books, American Gods. The show has received rave reviews and the book itself is fantastic. BPAL has been making a whole line of perfumes inspired by the book and the show, with over 60 scents in the current lineup. Of all the scents, this is the one I wanted the most, because of both the name of the fragrance and the notes. It sounded like would be a very dark, atmospheric scent. I make it a rule to not blind buy scents, but I broke that rule for this one; I purchased a half bottle from Crown and Tulip decants. If you ever want indie decants, specifically for BPAL or NAVA, this is the place to go. You can now buy this on BPAL’s website for $26 US.

In the bottle: DARK. Very opoponax and myrrh heavy. It really smells glossy and black, like the description says, but there’s something else almost mystical about it.

On the skin: The myrrh retreats to the back, but you can still smell it and it continues to lend a sort of magical/otherwordly smell. The violet and oak leaf come forward, creating a dark forest kind of fragrance. The opoponax and patchouli are forming the base, so they’re not as powerful as one might expect. There is also something almost “perfume-y” about it. This scent really evoked the image of a massive, magical forest at night, rustling trees and night-blooming flowers. Be careful in applying it though, because it is STRONG and I can see it easily causing headaches if too much is used.

*NOTE: Now that this has rested from travel, I like it a lot more. It’s much less floral and more “dark, magical forest” now.*

A sophisticated, womanly scent: rich myrrh and jasmine draped in the subtlest rose.

This little guy was a free sample that I received with a previous order. I was hesitant with this one, since jasmine usually hates me. You can buy it on BPAL’s website. It’s $17.50 US for a 5mL full size or $4 US for a sample Imp.

In the bottle: Oh boy. Okay. Upon smelling the bottle, I was pretty much socked in the jaw by the most powerful jasmine note I have ever smelled. It’s so powerful that I honestly find it to be a little overpowering. The myrrh and the rose were just barely detectable. Even though the rose is faint, it was still enough to give me a headache (rose notes generally do that to me). The scent itself is a little too “grandma’s vanity” for me, way too floral and strong.

On the skin: I couldn’t bring myself to put this on my skin because it just gave me a headache. The jasmine is out for blood and I’m not having it. If you like jasmine, then you might really enjoy this, but this scent is my kryptonite.

I want to start by saying that I pretty much went into this scent blind. I’ve never smelled church incense (frankincense and myrrh) before, so I had no clue what to expect, but I was curious since this scent is so raved about here and I love things with gothic elements. You can find this scent in Arcana’s ebay store, as well as in their Canadian retailer Pretty Indulgent and Australian retailer Femme Fatale. It retails for $19 US.

In the bottle: Incense is the first thing I smelled with this, but it isn’t headshop, hippie incense; it’s darker, more somber, like the olfactory equivalent of hearing church bells at night. I’m not getting anything else except frankincense and myrrh.

On the skin: Once applied, the sandalwood really comes forward and mingles with the incense. I get a hint of beeswax at the end, but its subtle; they make the scent more complex by adding another layer beyond the incense. “Unsettling” is a good descriptor of this scent. It really evokes the image of an ancient vampire in an abandoned church, surrounded by melted, flickering candles, waiting for some clueless human to walk in. It’s a scent that really makes my Anne Rice-loving heart happy. The picture below gives a good idea.